Posts from the ‘bridge’ Category

Are you sensing something similar to what I’ve presented in this artwork? A very large gap between differences and similarities? A space between two people that seems permanent? An inability to reach across time and space to reconnect with someone who was special to us? A sense that the space is getting wider? An idea that life as we knew it is not likely to return in a familiar way? During this pandemic I believe we’ve all been forced to adjust and accept certain changes. And I believe we’ve also tried to retain and keep close to our hearts people, things, and experiences that we are not willing to let go of–ever. They hold too much meaning and are part of our souls. To let go would mean failure and giving up on something that matters most.

This painting is my thought of what it may look like to build a simple bridge. Even though it may seem too delicate or hard to see, its a start. A way to reconnect with another soul who’d like to be touched by an honest peaceful gesture of friendship. Especially when differences are known to both individuals. We should reach out to one another because we believe in individuals being just that. Individually absorbing life and times, choosing a point of view and forming opinions. I hope despite core differences, we can each find our core similarities. And use these to make our way back to civility and respect of all people.

Lesson learned: If a friendship is formed on foundation of respect, holding different viewpoints should not matter.

Bridge over the Piscataqua River 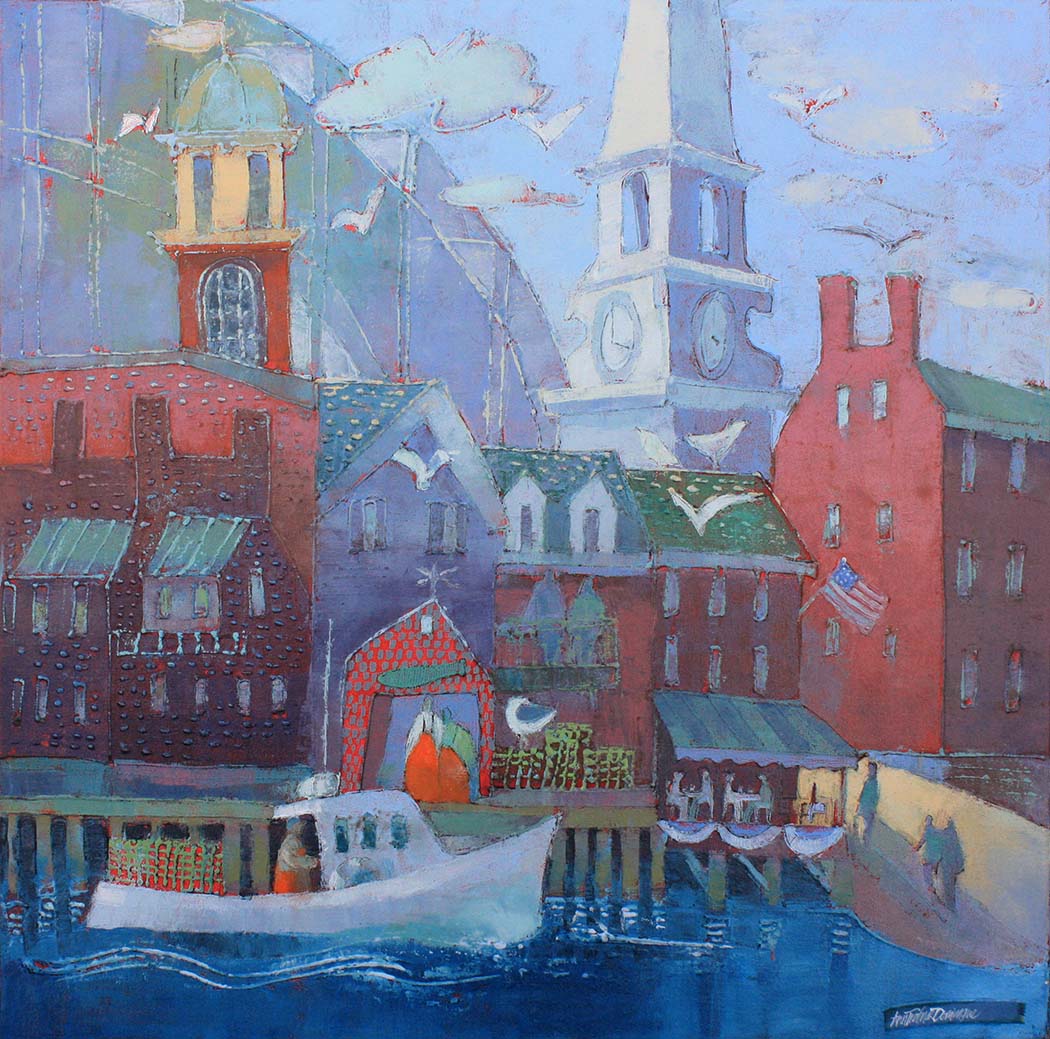 Bridge work has been ongoing for many years as needed repairs and replacements are done over the fast moving waters that join New Hampshire and Maine. We all depend on these critical crossings to get where we want to go. Some inconveniences and longer routes are simply part of living in a seacoast community as residents and tourists depend on the success of these impressive construction projects completed via cooperative arrangements between our two states.

As an artist I am also impressed by the design of the bridges and how they visually create connections from wide expanses of sky and water toward the grounded village communities at the bases. In this painting I have used the arched curve to tower over the village below as work and worship and play continues on daily in the cool shadows. Here’s hoping for a successful bridge-opening this summer as the new Sarah Long Bridge welcomes travelers again.

Lesson learned: Patience in building a strong bridge is paramount.

A family farm in Goffstown NH

Art and creativity with a touch of nature

Thinking about design every day